Plush stuffed animal for a baby

I previously made a baby blanket for my Sister's first grandson.  I had quite a bit of left-over fabric, so I thought that it would be fun to try and make a stuffed animal.  The parents-to-be are avid dog lovers, so it seemed fitting that the animal should be a dog.

I found a cute pattern of a floppy dog on Pinterest, and I'm sorry that I can't remember the designer.  The pattern called for button eyes and something for the mouth.  However, I decided not to add anything that the baby could pull off and swallow.  Instead, I opted to fussy cut the owl fabric for the eyes, and add a ribbon bow around the neck.  I gently filled the components with fiber fill (instead of dried beans) and sewed the arms and ears and legs to the body. 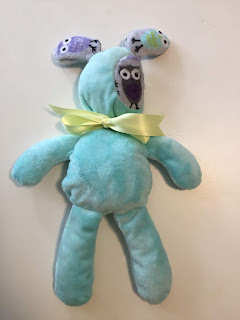 and here is the back view 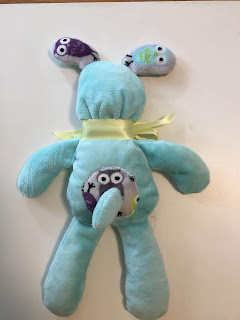 Summer and trying to keep up

It's the summer and, as always, I want to be outside riding my bicycle, hiking, walking, gardening, and camping.

This year I am trying to keep up the blog, but if you don't see it for a week or two, you'll know why!

I have no quilts in progress (what?!).  So, I've attacked a project that has been staring at me for 6 years.  My Grandmother Morgan saved all of her letters and cards from 1913 until the late 1970's.  My mother kept all of those letters, plus a bunch of her own.  When she passed away 6 years ago, I inherited the boxes of letters and cards.  The reason I ended up with them is because I've also inherited the genealogy files and pictures.  My goal was to get all the letters digitally transcribed and then donate the letters to a genealogy center.  Well, this is the time and the year to get it done!

My Grandmother Morgan, Anna Bertha Burkle Morgan, was born in Lafayette, Indiana to German parents in 1891.  She moved to the Seattle area when she was about 21 to be with her sister and father, who had moved out west in 1913 or so.  Most of the letters are from her Indiana relatives, and as her kids moved away, she started getting them from her kids.  In the 1970's, she started getting them from her grandchildren.  (Some of them are from me).

My mother, Helen Ann Burkle Morgan Adams, was born in Kent, WA to Homer and Bertha Morgan.  She lived in either King or Pierce County most of her life, with a short window in York, Pa. My mother's letters started when she went off to college at the University of Washington, and continue through the late 1970's.

I can see why most Women's histories are not in the history books.  Their lives are full of family duties and they were tired!  And their letters, while written to each other weekly, are mostly mundane details about their daily lives.  Not stuff that the schools want to teach.  But for me, they are a wonderful look into how their lives were during all those old times, how they felt about things, how cheap everything was compared to now, and how much genealogy information is contained in the letters.  My grandmother and mother both sewed and made quilts, so it especially dear when I read about clothes, quilts or blankets they made for me and my siblings and kids.


Anyway, I have been typing away and trying to transcribe them correctly.  And I hope to finish them soon.


What would you do with the original letters?  I don't want to toss them out, but I also don't want them all in my cupboards.  Any advice would be wonderful!

My sister is going to be a grandmother for the first time in August!  The mother-to-be asked me to make her a baby quilt long before she even got pregnant.  I decided that a Minky blanket would be just the right thing.  I had seen several with ribbon tabs sewn around the edges, and that also seemed like a great idea.

The baby blanket that I made is about 36" x 36".  Yours might end up a slightly different size, depending on how the fabric was cut in the fabric store.  You need 1 yard each of Minky fabric - one plain and one with a pattern.  I used owl fabric on the top and turquoise on the bottom.  You also need an assortment of ribbons that you'll cut into 4" to 5" pieces.  I used 60 ribbon pieces (15 on each side).  These need to be ribbons that can be washed. 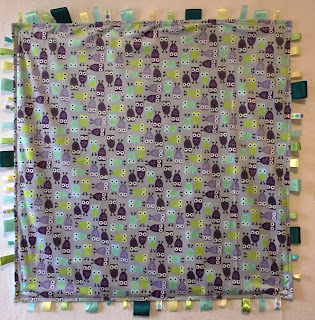 Cut a square piece of each fabric by folding the material diagonally onto itself and cutting along the selvage edge.  Whatever size that is, is what you'll use, but is should be close to 36" x 36", since you will be folding the 36" side up.  (This is similar to the step you would do if you were folding fabric to find the bias.)   Trim the two pieces, if you need to, to make sure that they are the same size.  (I forgot to take a picture of this step, so I'm showing you one from the internet showing you how the excess fabric will be cut away).

Fold your ribbon pieces in half and pin then onto the right side of the front fabric, making sure the ribbon loops are facing inwards.  Place the backing fabric face down onto the top of the front and pin (heavily).  Using a waking foot, sew 1/2" seam, leaving a 6" opening to turn the quilt inside out. (I also forgot to take a picture of this step, so I'm showing you a close up of the different ribbons in the final blanket). 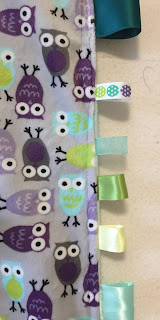 Trim corners, turn the quilt, and fold in the remaining seam.  Pin and sew close to the edge where the opening was, then sew 1/2" all the way around the edges. 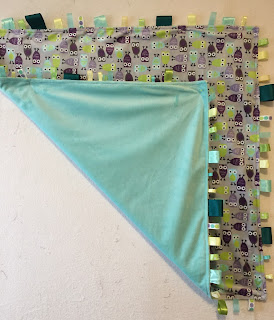 I hope you have a baby due soon in your family, or in your groups of friends, so that you can make this cute little baby blanket with ribbon tabs.
Posted by She Quilts It at 9:00 AM 1 comment:

I wrote a previous blog about the class I took from Gloria Loughman at Asilomar.  This is the post about the quilt that was started in the class.

I started with a close-up picture of moss blossoms. 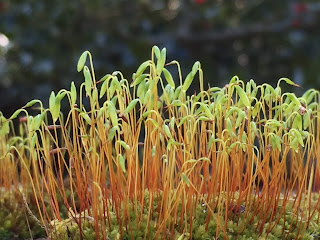 From that picture, I sketched up the idea to do an abstract of the moss blossoms with a pieced background.  The color inspiration was from the photo and the embellishment of the background pieces was based on techniques learned in the class. 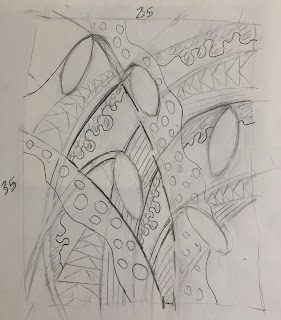 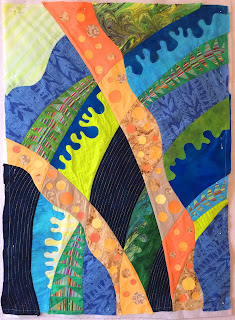 I thought that the background was way too vivid to carry out my idea.  I tried different colors for the moss blossoms and the stems.  I tried toning down the background by auditioning different colors of organza and tulle.  In the end, I gave up on doing anything with this piece.  The lack of a focal point was the final sticking point for me.   It didn't feel anything at all like my inspiration photo so I didn't grow to like it.  It went to the free table at the quilt guild.

Sometimes, it's better to abandon a piece and let someone else be inspired to finish it and love it.