When I started organizing my studio, I didn't think it would become a two week process.  Does anyone ever complete a task like this in the time frame they think they will?  Admittedly, this would have gone a little faster if I hadn't have decided to dismantle my drafting table and paint it (which involved sanding, priming, sanding, then painting).  But it looks so nice now, it was worth it.

After I got the table painted, I had a little left over paint.  So then came a second project that had nothing to do with my studio.  We had a little unpainted step stool in the kitchen.  Now it looks nice too, but this did stall my studio project a little bit.  I bet you also have tag-along projects that crop up in the middle of other chores.

After I got the table together again, I decided to move a dresser and a bookshelf, then my ironing board.  Then a couple of my pictures didn't look that great, so I moved them.  I dusted off my ribbons and the angels (and did they ever need it).  I kept thinking it would be nice to have twice the space, but I don't, so I'll have to make it work.   I did put a few small things in the guest bedroom to get them out of my studio.  The guests won't mind, will they? 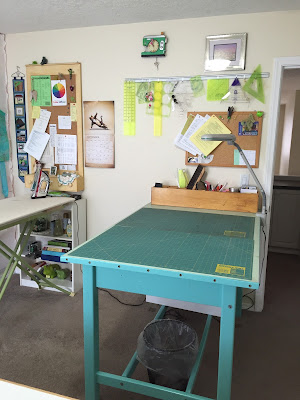 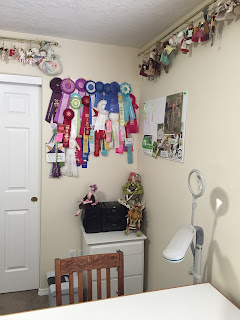 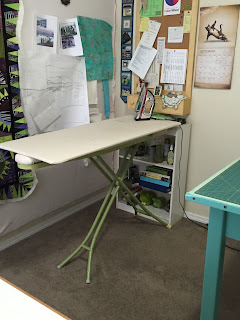 Some things had to find new homes: friends who were nice enough to take the stuff,  donations to charity, and a few things were tossed in the garbage.

Whew!  I feel 20 lbs lighter and 10 years younger now.  Plus I have a nice clean studio again.

Happy organizing to you!
Posted by She Quilts It at 10:00 AM