Vagabonds set up another challenge for 2021.  We were challenged to make a 24" high x 24" (or less) width art quilt that features a pair of legs walking on a path.  I remembered a picture that I took of one of my granddaughters helping me in the garden when she was about 2 years old.  She was wearing little yellow boots and blue jeans.  It was such a sweet picture!  I knew right away that it was the one I was going to use. 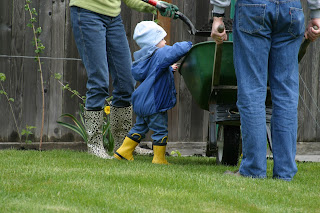 I printed the photo, traced the parts that I wanted to use, and had it enlarged at my favorite blueprint shop.   I don't know how many of you live in the Portland, OR area.  If you do,  Rose City Blueprint is fast and cheap.  It only cost $3.25 to enlarge my sketch to 24" x 24". 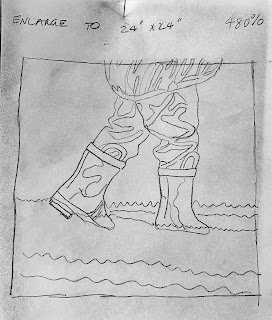 Once the drawing was the size that I wanted, I traced the lines onto clear acetate film.  Notice that I had to imagine the bottom of the boots that couldn't be seen in the photo. 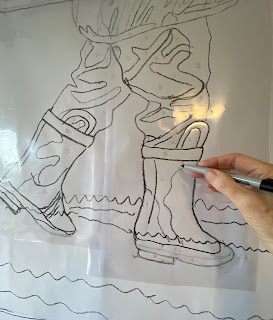 The acetate tracing was taped to a board covered with a Teflon sheet.  I've used this board and sheet many times and I keep it on hand for art projects.  I tape it at the top so that I can flip up the film and place pieces of fabric. 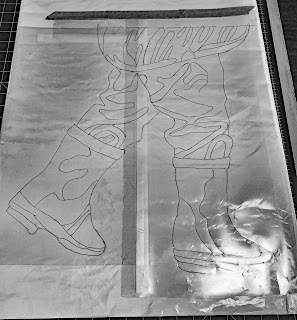 For the boots, I picked 3 shades of yellow, fused them to Steam-a-Seam Light II and cut out the pieces, placing them to match the drawing. 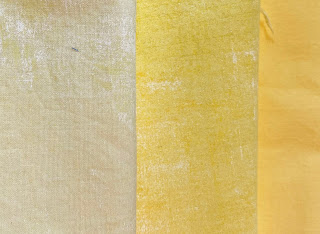 For the pants, I picked 3 shades of blue, following the same technique. 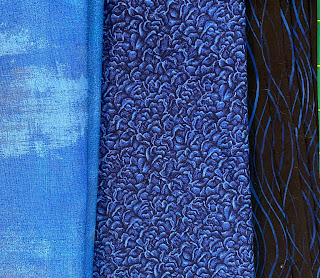 And for the jacket, I picked 3 different shades of blue than were used for the pants, following the same technique. 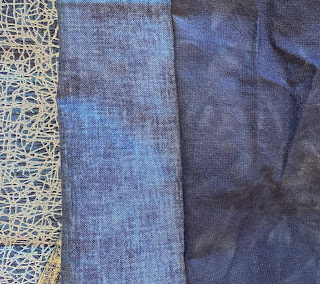 When all the pieces were placed, the entire piece was steamed and allowed to cool.  Here's what it looked like on the assembly board. 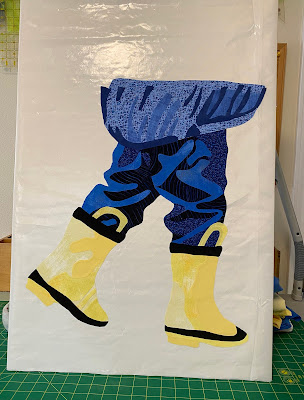 The background started out with just a couple of pieces of fabric to test out the colors. 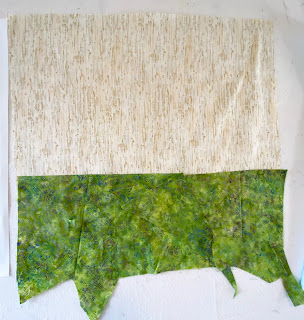 It seemed just a bit too simple, so I added some different colors into the grass.  I trimmed notches into the top of little pieces and layered them from top to bottom. 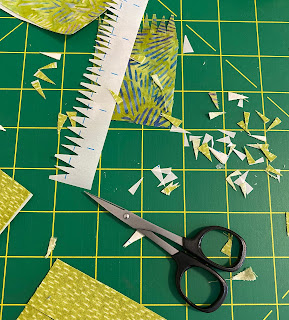 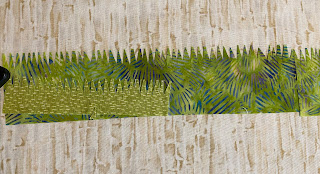 When that was complete, I fused the legs and boots on the top, weaving the grass around the boots.  I quilted it with a quilting stitch #1304 and a walking foot on my Bernina 570 sewing machine.  It was easy to start with lines 3" apart, then sew down the middle of those lines, and once more between the middle of all of the lines.  I liked the way that stitch looked like rain with it's two forward and one backward stitch. 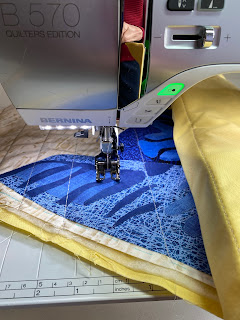 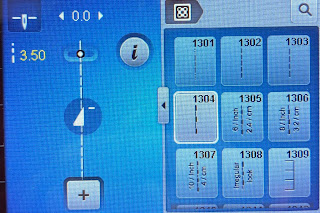 The piece is 24" x 24" and is faced.  I added silver bugle beads to enhance the rain effect, which were added after I took the photo below. 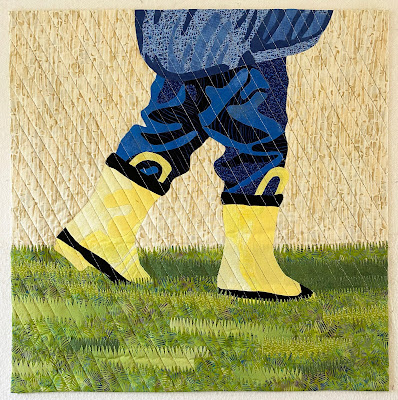