I have so much fun making modern quilts.  One company, Sew Kind of Wonderful,  has been putting out patterns to go along with their tools and I've made my second pattern now.   The pattern name for this one is called, "Chic and Jazzy".  The pattern instructions call for making 12 blocks and sewing them in a strong vertical and horizontal setting.  But I thought that I would like it better as a block set on point, so that's what I did.  Here are the changes that I made.

First, I had to make 13 blocks instead of 12.  Second, I changed the sashing from 6" to 4" so that there would be less white space, but still plenty of room for fancy quilting.

I like lime green - have I told you that yet?  I bet I have.  I also like turquoise and teal.  So for this quilt, I used the green in place of the gray called for in the pattern, and used different fabrics for the centers and the surroundings for each block.  I have a lot of lime green fabrics.  Who knew how much, just a lot!  I also have a lot of turquoise and teal.  Yes, many piles reside in my stash.


I always over-cut the setting triangles so that the quilt can be squared up in the end.  In order to get the right sized triangle to fit, I marked the 16" from the corners, and made sure this lined up with the edges of the blocks.


The top ended up measuring 60"x 60".  Here it is almost done sewing.  This picture shows how you sew the rows to get the on-point setting.  It's sewn into diagonal rows.  Then the rows are sewn together.


I plan to use the green for the binding, and do the quilting with heavy batting so that it'll pop.

My previous post showed you what I do to maintain full binding when I start with an untrimmed quilt.

Sometimes, I sew on binding for our charity group or for a friend.  In those cases, the quilt usually comes to me already trimmed.  And most of the time, it is trimmed even with the edge of the top, leaving only 1/4" seam allowance.

Since most binding is cut at 2-1/2", which gives a 3/8" finished binding, the 1/4" seam WILL NOT fill the binding.  There will be a little bit of space with nothing inside.

To fix this and still end up with a full binding, I sew a 3/8" seam.  Start the first end 3/8" from the edge, and pin the binding even with the edge of the quilt. 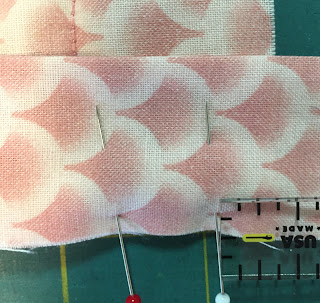 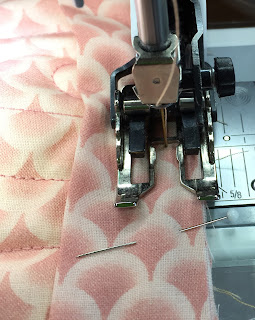 When you fold the corners, place the fold even with the edge. 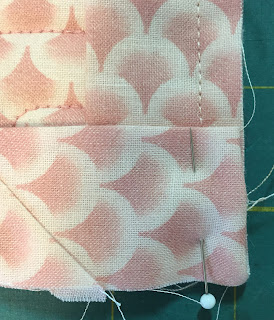 Keep sewing all side, leaving a tail at the end.  Sew a corner per my previous post.

You don't need to trim anything off after you've sewn on the binding.  It will be FULL with the 3/8" seam allowance.

I hope you use this technique the next time you add binding to a quilt that has been trimmed even with the edge of the top.  Yes, you will lose 1/8" of the top, which may end up cutting off the points of some blocks.  But most of the time, there is a solid piece of border fabric on the outer edges, so it won't affect the look of the quilt at all.

May all of your bindings be FULL.
Posted by She Quilts It at 9:00 AM 1 comment:

Email ThisBlogThis!Share to TwitterShare to FacebookShare to Pinterest
Labels: binding

Just serging away the day

I have been sewing nearly all of my life and I have finally bought a serger.  So I'm learning how to use a new machine.  That's good for my brain, don't you think?

My friends advised me to go with a Baby Lock serger, and to make sure and get one of the newer models with the automatic threading and the ability to do a cover stitch.  So I sold some old diamond rings that were sitting in my safe, and splurged.

Here is my new serger!  Its the Evolution, which can sew just about everything and hold eight spools of thread. So far, I've taken one beginning class and have watched a ton of YouTube videos.  What did we ever do before YouTube.  And a huge shout out to those of you that do videos!

I dived right in and pegged an old pair of yoga pants (so that they're not the old fashioned bell bottoms), made two pairs of legging/pants, and have made two knit tops.

I'm having so much fun.  I don't know why I waited so long to get one!  Well, maybe it's all the quilts that are running through my head that keep me more interested in making quilts than in making clothes. And one more toy.....

I hope you enjoy learning new things too.
Posted by She Quilts It at 9:00 AM 1 comment:

I learned a new quick technique from a quilting friend and I thought that I would pass it along to you!

Most quilt shows call for a 4" hanging sleeve, and I've heard that some are calling for a 4-1/2" sleeve now.  Wow.  In order to make the quilt hang nicely, the sleeve needs to have more space on the outer (or back) edge and less up against the quilt itself.

My friend told us to cut the sleeve at 9" wide and the length needed for your quilt.  Then press this is half lengthwise. 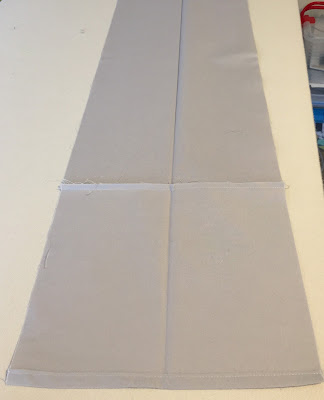 Open it back up, then press both sides to the center. 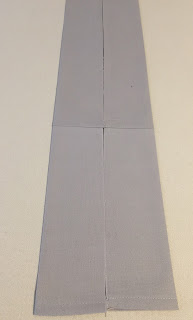 Put these two raw edges together and sew a 1/4" seam.  (in the picture below, you can see that I sewed the seams on the edges first, since these are easier to sew when the sleeve is flat). 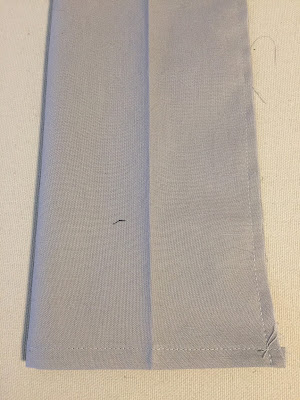 Press this seam to one side carefully, so that you keep the previously pressed edges. 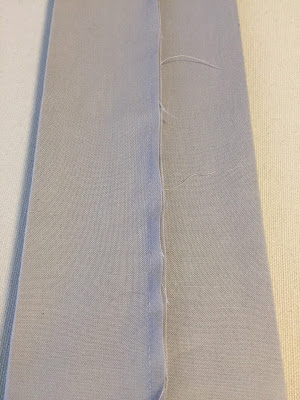 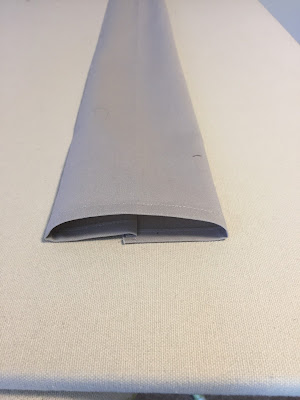 
I wrote a blog about my favorite corner binding tool, called the "Corner Mark-It " on March 14, 2016.  You can find it here:  binding blog on March 14.  I have told so many people about this tool, and unfortunately, it had been taken out of production, so was not available.

One of my friends has sleuthed out a new tool very similar and showed it to me this week.  Its called the "The Binding Thingy ".  She found it on line at Annie's Craft Store.  They have a great set of pictures on how to use it and there is also one on YouTube.  Here is a picture of it:

So go and read my earlier blog about how to use this device and look at the new videos and pictures on the internet.  Happy binding at all of your corners!
Posted by She Quilts It at 9:10 AM 1 comment:

I have been wanting to take a class in painting on fabric, and the expert is Susan Brubaker-Knapp.  One of my friends mentioned that she was going to Asilomar to take classes and that several other people from my guild were heading that way in April 2017.  So I jumped at the chance to take this week long class and have some fun traveling with my local quilting friends.

I didn't think too much ahead about where Asilomar was and how long it would take to get there.  But a few weeks ahead of time, my husband asked me where it was, so I looked it up.  Wow, I discovered that it's a long ways away and 4 days of travel R/T is what it took to get there.

I also started looking at the supply list and realized that I need to get my rear in gear and take and print the pictures and match thread to what I think I wanted to paint.  Yikes!  One of my friends takes fantastic up close pictures of flowers in her yard.  I asked her if I could use one of her images and she said yes!  So here is the one that I chose to paint in the class.

The class decided that the white tips on the flower petal should be "up", so I painted it that way.  The technique is super easy.  Well, easy when the teacher is in the room with you for 5 days!  You enlarge the photo to the size you want to paint, trace it onto tracing paper, trace the design onto PFD (prepared for dying) fabric, then just mix up your paints and paint the traced areas.  Add a little thread stitching, and that's it.  So here are some pictures at the class and at the retreat center.

Here is my shot with Susan.


Here are some pictures of my friend's pieces.


And here are some pictures of the beach at Asilomar and my friends relaxing in the lodge.

I just couldn't resist sharing pictures of all the flowers that were blooming at Asilomar.  We've been drenched this year in Washington, and some are calling our area "The Pacific NorthWET".  Our flowers and blooms are a month late.  So when I went to Asilomar, which is just outside of Monterrey, California, I was knocked over by all of the color.  Here are some pictures taken on my daily walks.  Enjoy! 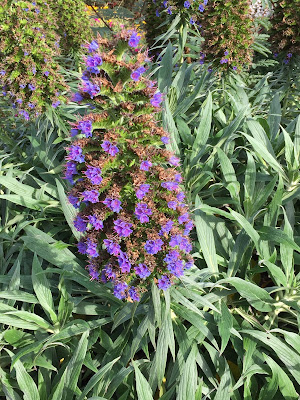 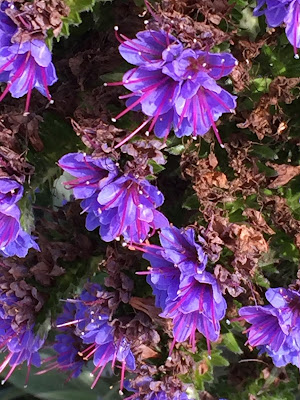 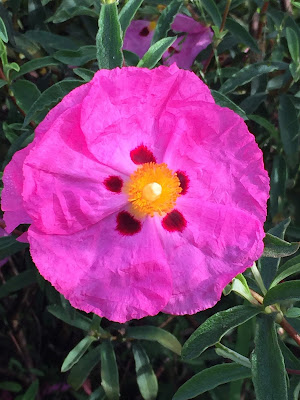 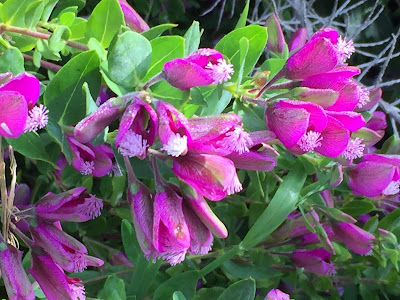 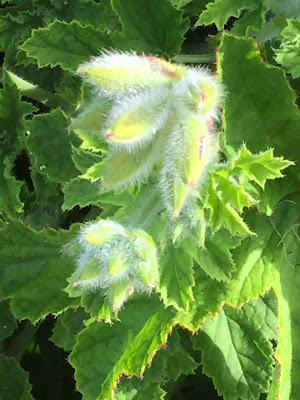 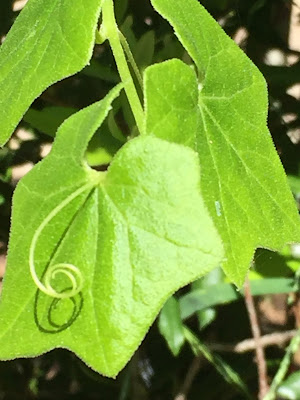 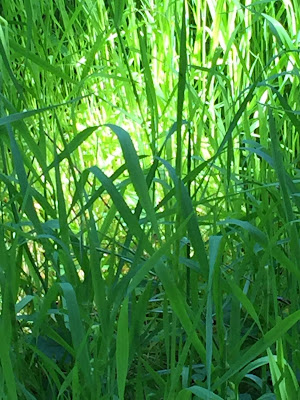 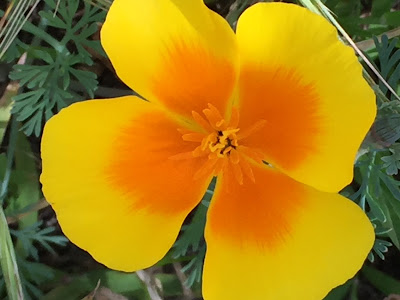 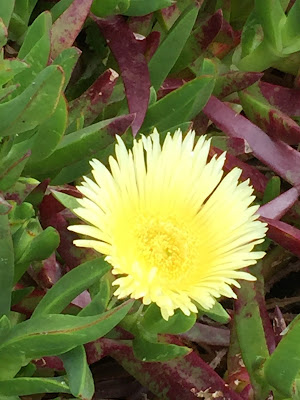 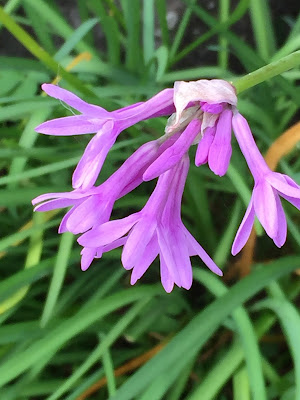 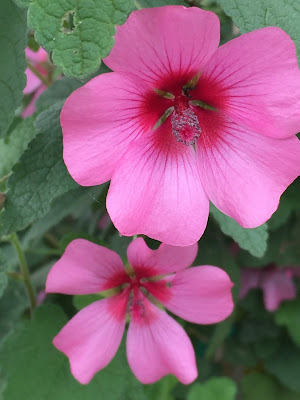 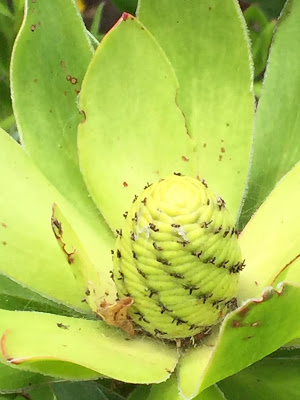 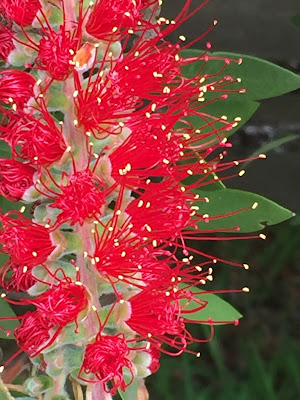 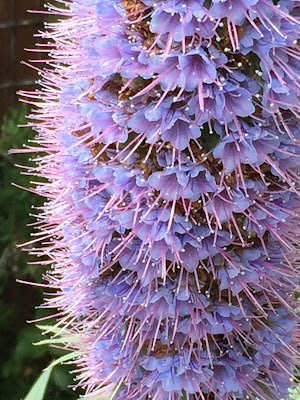 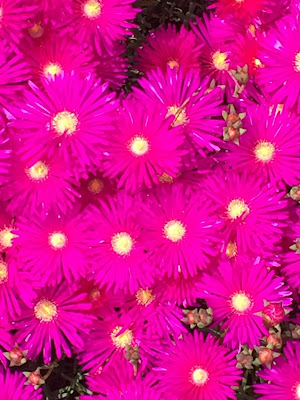 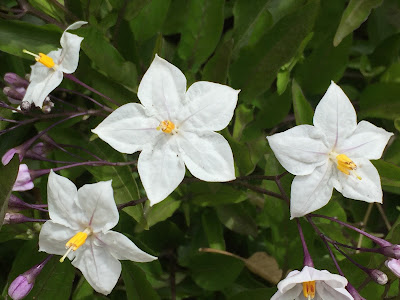 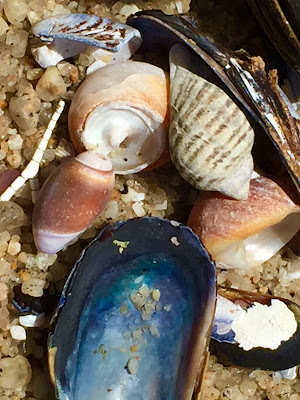 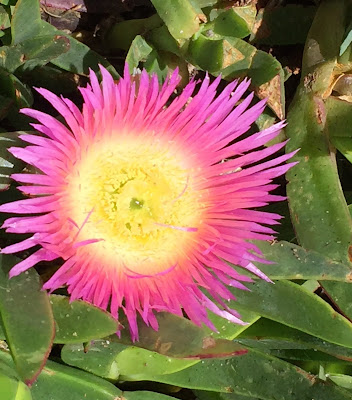