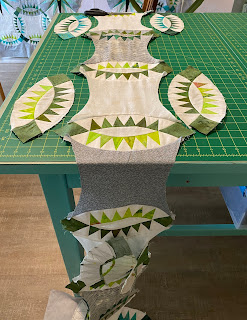 Then I sewed together the "Mariner's Compass" vertical rows. (See the second row in the picture below.)

The key was to sew rows so that they nested as an "Ess" shape.  Very similar to the process of sewing together the pickle dish units.  Look at the center vertical strip and the one on the right.  You can see that I picked up each piece and sewed them together to make the vertical rows.  And can you see the resulting "Ess" gap?  That's how you make it easier to sew all these curved seams together.  I sewed the border pieces onto each end as well. 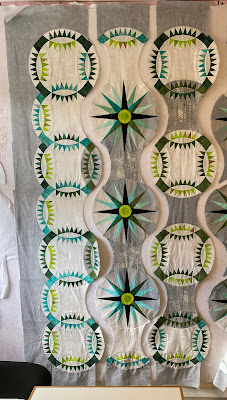 Then the vertical rows were sewn together.  Here is what it looks like with those two rows sewn together.  I actually sewed it in sections.  First by sewing all of the center pieces with their corresponding pickle dish section.  Then going back and sewing in the Mariner's Compass sections with the center pieces.  And finally, by sewing the pickle dish end pieces and border pieces together.  It wasn't complicated, but did involve a lot of pinning and SLOW sewing.  Oh, and in order for the Mariner's compass to overlap the pickle dish ends, they do have to be marked for the curve.  I just made a freezer paper template and marked the seam line. 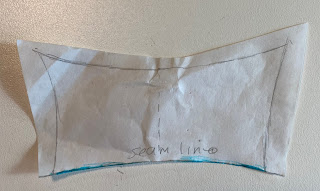 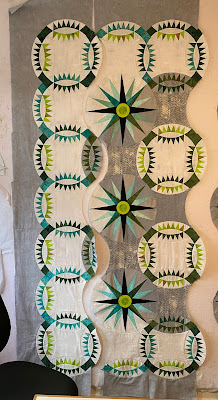 I hope you like the color placement and beauty of this quilt.  The top ending up being 90"  x 90". 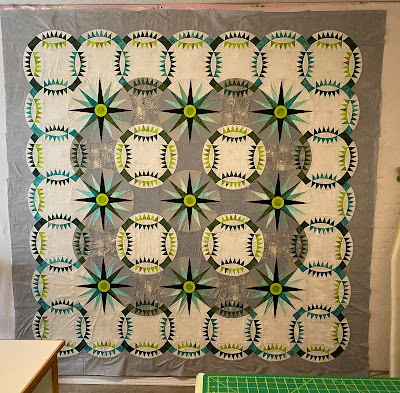 It's so big that it goes from the floor to the ceiling of my design wall and I wasn't able to step back far enough to get a good shot of it.

Anyway, I hope you like it.  Now onto the quilting! 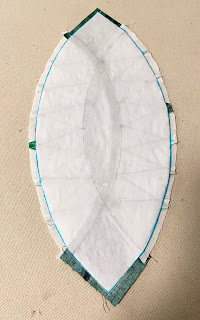 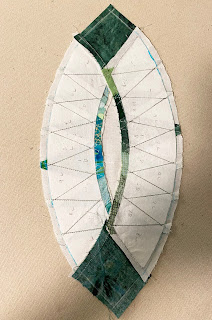 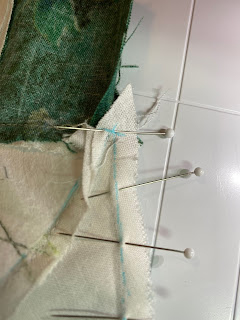 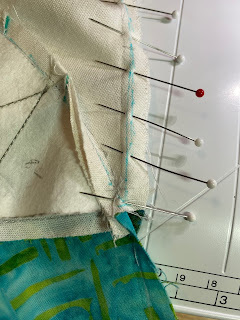 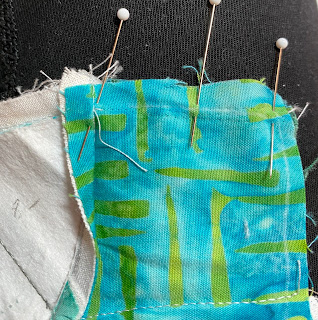 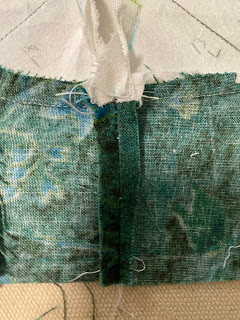 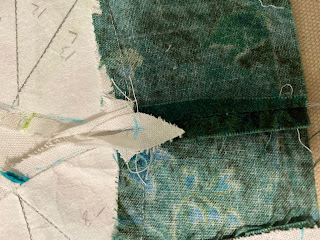 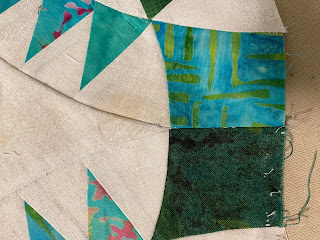 OK, I've completely lost track of how many posts I've made about the making of the Pickle Dish and Mariner's Compass Quilt.  I think I numbered them, and then sneaked in a few about the intricate units.  And then added a little bit of humor about how my group is all whining about making the quilt.  So, don't ask me what number this one is - it's a continuation, OK?

I got bogged down when I had most of the sub-pieces done and had a hard time figuring out what color to put on the edges of some of the center pickle dish units.  I cut out and placed moss green.  Too dark.  I tried lime green.  I tried white.  AAH!  I don't really like any of them, but ended up with the moss green so that the background receded behind the Mariner's Compass blocks.  Here are the pictures of the trials. 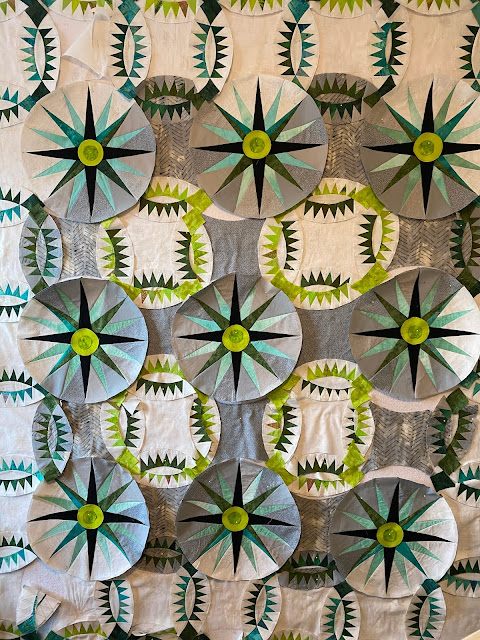 All lime green made the circles a focus element and it fought with the Mariner's compass blocks for attention. 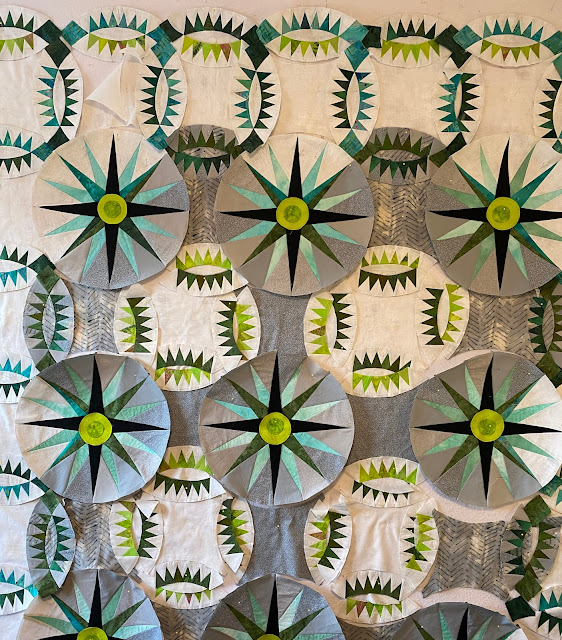 All white - too blah! 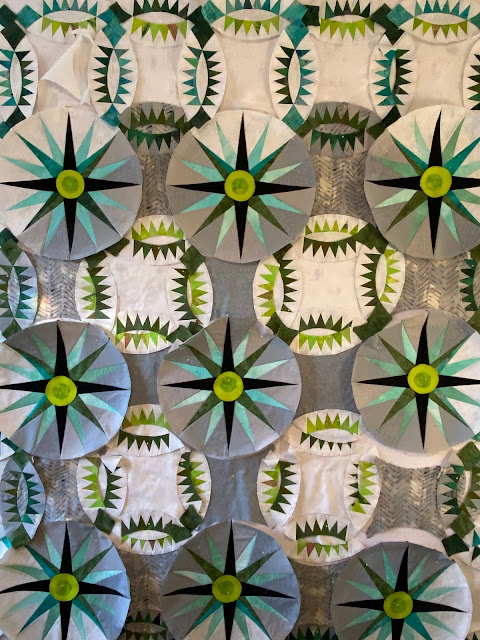 Moss green just right.
I hope you learn something from all of my trials.  I know the other people working on their quilts are learning what NOT to do!

Sewing outside border to outside pickle dish units

For the border of the Pickle Dish and Mariner's compass quilt, I designed the pieces to fit around just one pickle and then seam them where they met.  I remembered a cool technique that I learned from Judy Niemeyer on how to piece large pieces together in an ice cream cone fashion.

Here is a picture of my freezer paper template of the border piece. 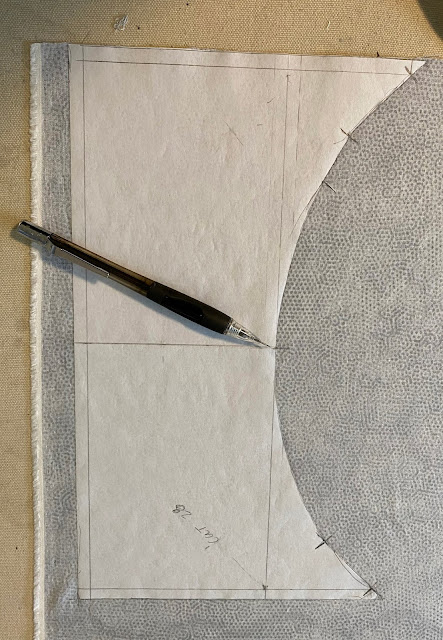 I marked the seam lines and a few key intersection points and left a bit of overhang on the outside edge to be trimmed after the quilt gets quilted. 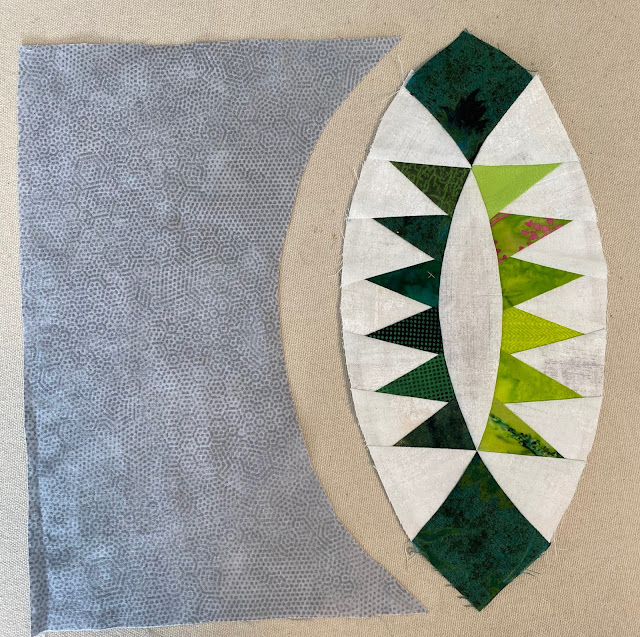 Just like the pickle dish units, the mantra is pins, pins and more pins.  I matched the center, the intersection of the pickle pieces and the end pieces and then the seam at the edge.  Then I placed pins about every 3/4 inch. 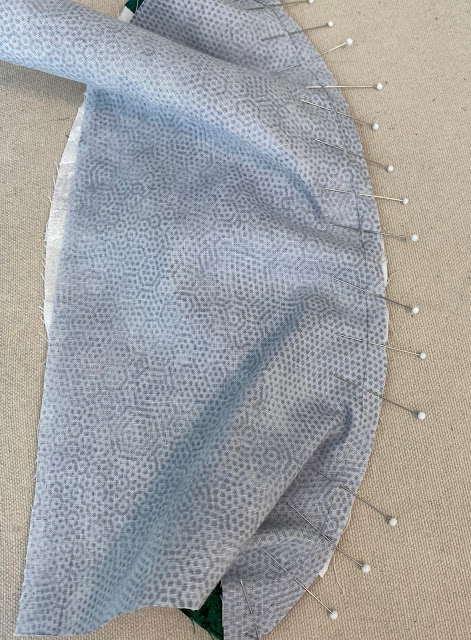 Then the fun part comes when you put the edge piece on the top and grab up all the fabric like and ice cream cone.  This bends the top pieces to more or less match the bottom curved piece. 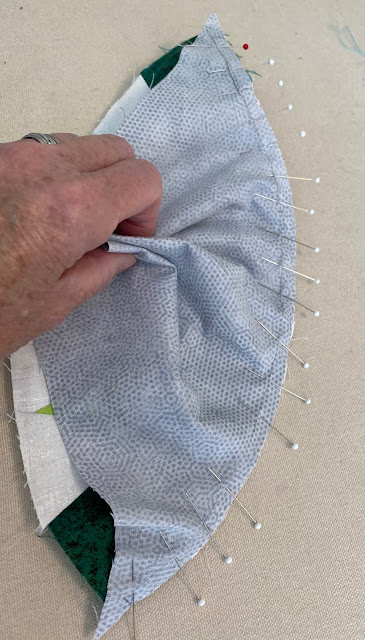 It's quite easy to sew this long curved line this way, by letting the curved piece stay curved on the bed of the sewing machine. 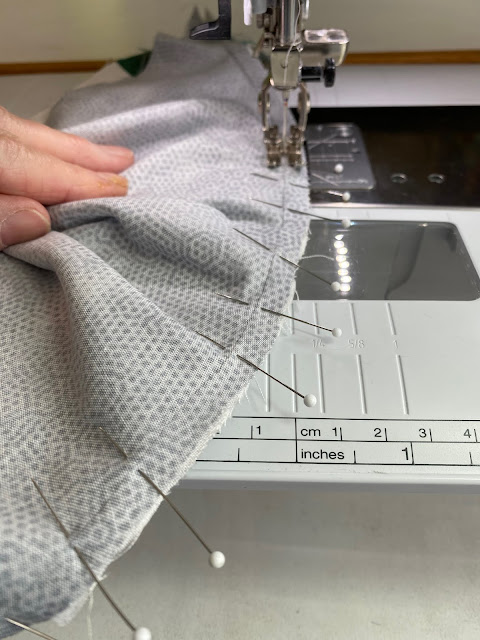 When it was all sewn, the seam was pressed towards the outside edge and away from the pickle dish unit. 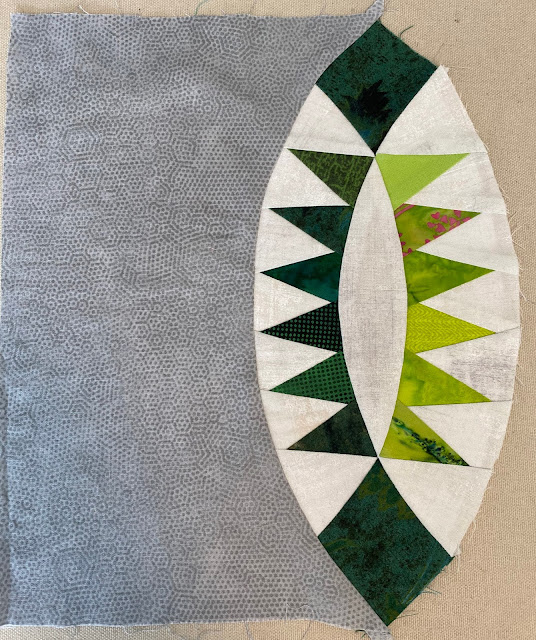 I hope these pictures and description of the steps helps you on your next quilt.

Posted by She Quilts It at 3:50 PM No comments:

Clark County Quilters tried really hard to have a quilt show in April.  COVID-19 dashed those hopes pretty quickly.  It was rescheduled for November 2020, but again, that darn COVID-19 started increasing in number of people both testing positive and being hospitalized.  So that show got cancelled.  But the board of CCQ was very inventive, and they had us submit our photos and a few of them put it together on a whole new website.  The "show" was unveiled on November 12th to the members and we got a little preview of how to see the show and vote for our favorites.

Here is how to access the show until the end of December and vote for your favorites. Go go to the show website.  Note:  all of the ribbons and awards will be decided by YOU, the viewers.  There are no judges this year.  So be sure to vote for your favorites in each category and for the best of show.  Type this in your browser:

You will get this screen: 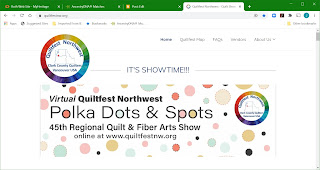 If you scroll down you will get this screen.  If you're ready to look at the show, select Quiltfest Map: 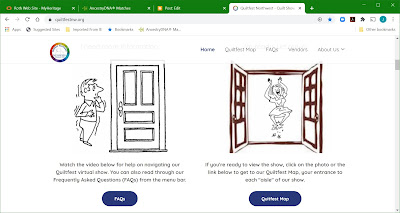 Then just follow the categories and vote for your favorites.  If you're stuck, there is a short video letting you know how to get into the show. 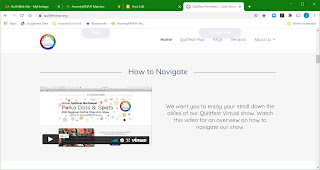 And finally, if you want to find the quilts made by a specific person (me, maybe?), click on the FAQ button and it will bring up the quilters by name.
That's it, have fun, and vote!

Posted by She Quilts It at 5:00 PM No comments:

Who egged who on?

At a recent meeting of my small quilt group, now called "JAWS" (Joanne and the widows), we kidded each other about taking on the Pickle Dish and Mariner's Compass quilt project.  It's so detailed and so huge!  We are all accomplished quilters and can sew this kind of quilt.  But we are starting to look at each other like we are crazy!

Now that we're a couple of months into the process, we are realizing that this monster is going to take FOREVER!  Like in 3 or more years!  I know that it takes up my whole design wall, so I can't work on anything else until it's fully pieced.

Somehow, since I have made the most progress, it is now my fault for egging on the others.  OK, I agree that I can incite people to quilt like maniacs and produce results.  A little bit bossy, a little bit enthusiastic, a little bit encouraging, and sometimes, a little bit too blunt.  As in, "Are those basting stitches ?"  Or, "Did you forget to get dessert for the quilt group and have to cut those cookies into tiny little pieces?".  Anyway, I think I'm off topic slightly.

We are laughing (a little bit) when we think and say that we all must be crazy!  They don't really hate me (yet) and we are having fun teasing each other about it.  Really though, what else are we to do when we can't go anywhere due to COVID-19.  Might as well sew like maniacs.

We think we might have to change our group name now to "Joanne and the Whiners".  What do you think? 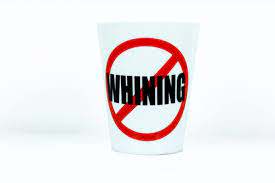 This is a continuation and the final posting about the making of the Nehalem Bay Reflection quilt.  As I was painting and quilting, I had fond memories of our hikes and camping trips to Nehalem Bay State Park in Oregon - hiking on the beach, riding bicycles into nearby Manzanita, picking wild huckleberries, riding on the bicycle trails all around the campground and park,  looking for deer, campground dinners, and starry nights around the campfire.  That's why I like to write about my art quilts - they bring back so many memories and start new ones.

I didn't do any thread painting on this picture like I did on all the bees on flower quilts.  The actual quilting gave all the movement I wanted on this piece. I used mostly blue, gray and off white thread to do the quilting, which was done on my sit down long arm machine.  It was faced at the edges. 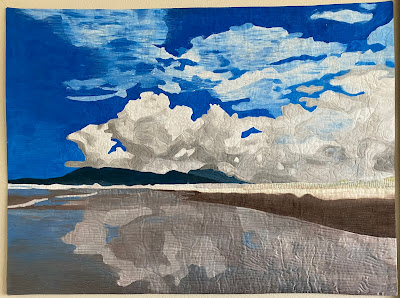