I sketched up a few background designs while watching TV the other night.  I had in mind to make a white and light gray background.  So I played around with straight lines, wavy lines, complicated complex lines and ended up with about 20 ideas. 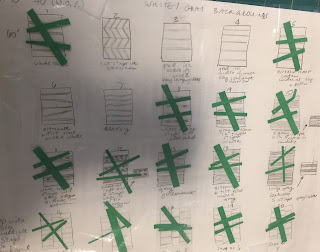 Then I cut up some green construction paper and laid the strips on top of my sketches to see how it looked.  In the end, the most simple background seemed to be right.  All the more complex ones kind of lost their look with the strips on top, so I figured...why go to all that work when it would barely show?  Save those ideas for a future version.

I pulled out all my gray fabrics and took monotone pictures with my cell phone.  The lightest ones looked the best and I narrowed it down to 3 shades.  These were cut into relatively narrow strips varying from 2" to 3". 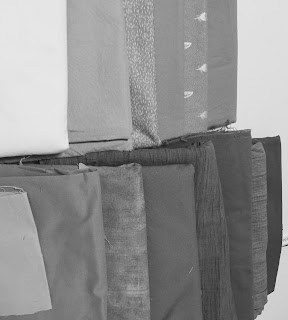 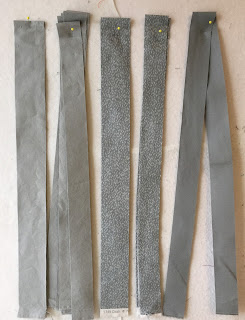 The white background, which I wanted to predominate, was cut into varying widths as well, from 3" to 5".  The strips were laid out on my design board in a pleasing manner, then sewed and pressed. I turned to a lesson from a strip piecing class and used it as a jumping off point to design the strip set for this quilt.  I wanted to use some of my green fabrics, and when I pulled them all out and laid them in color waves, I decided to add some of my light turquoise/teal fabrics too.  I knew that I wanted to stay in the light to medium range since I had an idea to offset the color with dark gray and wanted the contrast.

After sewing and pressing the color strip set, I cut it into 6" wide strips and added gray borders.  I have found through the previous 5 powerline quilts that it is easier to sew together the odd pieces, which are on the bias, if I first stabilize the strip sets with a solid piece.  That way I'm not dealing with multiple bias edges, raveling edges, and seams that want to pull apart.

This quilt was a little tricky to piece because of all the horizontal lines.  I first folded the vertical strip in half and marked the background along this line. 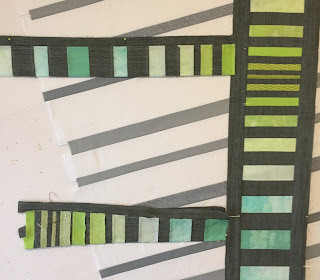 In order to make sure it was straight, I used two rulers at a time, then removed one of them to do the cutting.  This left me with the left and right pieces. 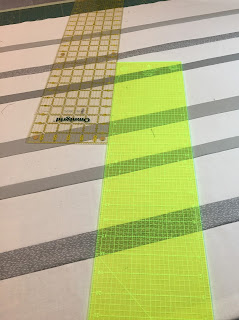 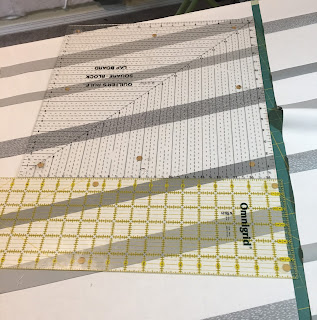 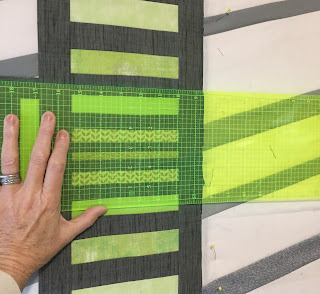 After marking and cutting the background, I inserted both right hand strip sets.  And voila!  It worked out.

And here it is quilted and faced.

I hope you like this more modern summery version.
Posted by She Quilts It at 9:00 AM