I was sewing late last night and the spring holding my throat plate broke.  (Oh, and the day before, my walking foot stopped doing zig-zag stitching.)  It's the second time the spring has broken off, and the last time I tried to get a replacement, I had to buy a whole new throat plate.  Luckily, I kept that old one, so I had one more spare spring.  But, that was a huge clue to me that it was way past time to get a new sewing machine.  I am a dyed in the wool Bernina sewing machine owner.  I've had my model 440 for over 10 years and the last time I took it in for service, they told me it was just about worn out.

So, the very next day, I headed down to a nice Portland dealer, called Modern Domestic.  They've been advertising all kinds of specials, and I knew that most of them had expired.   But I was ready to look seriously and perhaps buy a machine.

They showed me all of the models they had, some of the used ones, and then told me that they had recently received classroom machines that could be sold at a discount off their normal selling price.  Wouldn't you just know that it was the exact model that I was looking at!

I selected the model 570, which is the quilter's edition with an 8" throat space, which is slightly larger than the standard machines.  Its not as huge of a space as you would get on the huge machines, but since I have a quilting machine, I no longer need the huge space.  This one is more portable, meaning that it's not too heavy for me to carry.  I was able to bring it home and I'm over the moon. 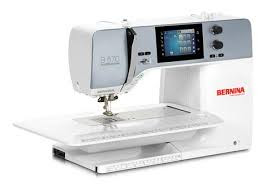 I'll work on it a little bit, then take my intro class in October.

Here's to new sewing machines!
Posted by She Quilts It at 9:00 AM