This is the 9th quilt that I've made in the shadow selfie series.

We took a nice shadow picture while walking in Walla Walla, WA in September.   It called out to use an orange background to both represent fall and to complete the color effect of the series.  I bought a nice new orange batik and cut it into wedges for the background.

I wanted to try using a different technique than the others in the series, so I placed the black fabric on the background, placed the picture on top of that, and triple stitched around the edges.  Here it is pinned in place: 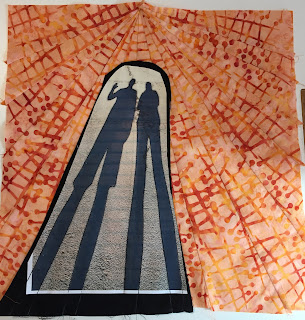 Here I'm showing the stitching and the settings on the triple stitch. 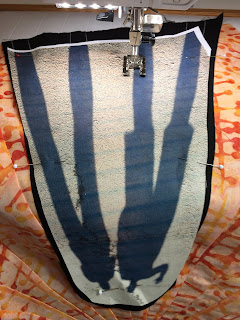 I used 2.4 stitch length on the long straight lines. 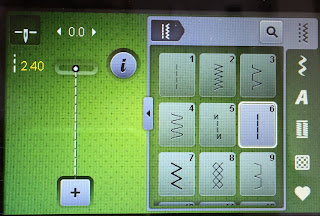 Then I reduced the stitch length to 1.5 to go around the smaller curvy edges. 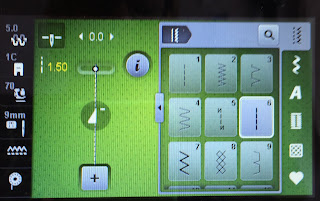 Then, I cut off the paper, and removed the excess black fabric.  And since there was a lot of fraying at the edges, I zig zag stitched around the outside edges.

I wanted to add some fall leaves at the bottom to make it feel like we were strolling through the downed fall leaves.  I got the idea to use some of my fancy fabrics, including lame and organza and make leaves out of them.  Here is a picture of the sandwich that I made.  The layers are dissolving foundation, organza, thread (if used), organza, and Solvy.  I used a blue dissolving marking pen for the first set, but it was too hard to see.  On the later sets of leaves, I marked with a permanent marker on the Solvy. 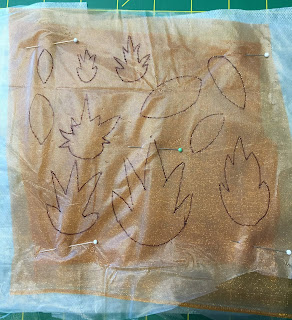 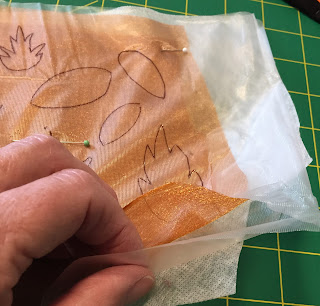 I zig zag stitched around the edges with a .4 stitch length and 1.4 stitch width. 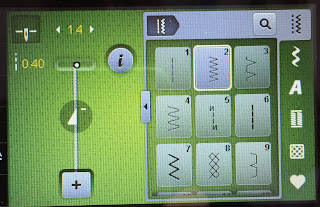 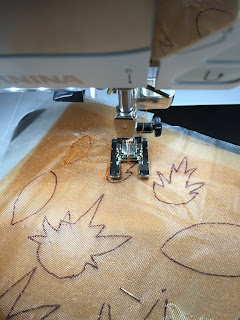 Then I dissolved all of the disappearing products in warm water in the sink, laid the pieces flat to dry, and cut them out.  Here's what the leaves looked like after they were cut out. 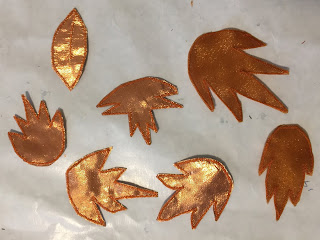 And here is the finished quilt. The piece is 12" x 12" and has traditional black binding to go along with the rest of the series.

I hope you like it.  And I hope you have liked seeing this series of 9 Shadow Selfie Quilts.