After letting the mossy log, er field of lettuce,  simmer for a few days, I decided that I had to back up a little bit and tear some things out.  Ripping out is sometimes called un-sewing, and there was plenty to edit out on this piece.  I took off all but the three center pieces of the log.   That helped a lot.

Then I made some sheets of moss in various color ranges.  It was so fun to lay down recycled and re-purposed stuff.  I used dyed cheesecloth, dyed trim, ribbon, moss, wool roving, dyed goat hair, painted color catchers, thread, snippets of fabric, and lichen.  There were two wash away stabilizers used; one for the bottom that is normally used for embroidery, and clear Solvy on the top.  I tried stitching willy nilly on one piece, and did a purposeful grid on another.  After dissolving top and bottom stabilizers, it was clear that willy nilly doesn't work that well.  A lot of the pieces dropped out in the sink!  So for all the rest of the pieces of man-made moss, I went back to the grid system and added enough free motion thread work to capture all the little pieces in the thread net.

Here are a couple of pictures of the man-made moss, which was made in different shades. 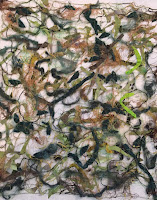 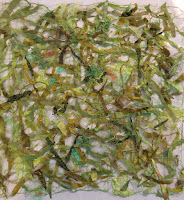 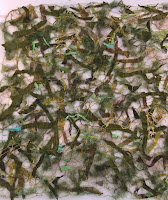 There were a lot of pieces of green fabric that were placed in the background with a layer of tulle on top.  This still didn't look right, so I switched the orientation of the piece, and now plan to make it into a mossy tree in the Northwest forest.   Now I need to remove most of the dark background and get some light into the piece.  Hmm, maybe some branches and little trees to give the feel of the forest and give a sense of scale.  Stay tuned. 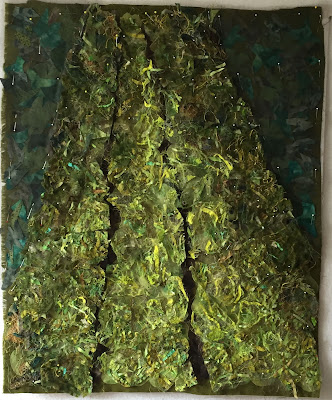