This is a continuation of the posts about the elongated hexagon quilt.

After playing around with the placement of the pieces, I marked all of the corners so that I would know where to stop and start.  But, before I started sewing it together, I felt like it was way too busy and needed something to calm it down.  I originally DID NOT want to spend that much time on this quilt, but as it progressed, I became interested in playing some more with the layout.  I even lost a little sleep while my brain was thinking about multiple quilts.  Egads!  How on earth did I jump from an easy quilt that I intended to donate, to thinking about multiple quilts?  I guess that's just how we quilters think. The ideas just don't stop coming.  Or to put it another way - I suffer from TMITSIL.  (Too many ideas to sew in lifetime).  And lookout because its catchy.

I decided that I really like the deconstructed modern quilts and the ones that were called "shattered".  The idea of this modern take on a quilt layout is that you gradually leave more and more white space between the pieces so that they merge into nothingness.  (Is that even a word?).  Here are some of my ideas as I worked them out on my design board.

The first one put all the pieces in the upper left corner and spread out the rest to the right and bottom. 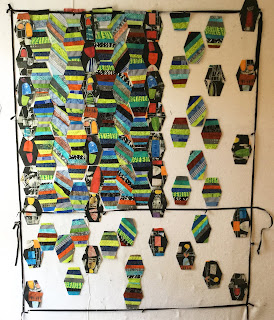 These two moved the bulk of the pieces to the left of center and added solid pieces in some spots and fractured pieces in others.  Yuck, still too heavy. 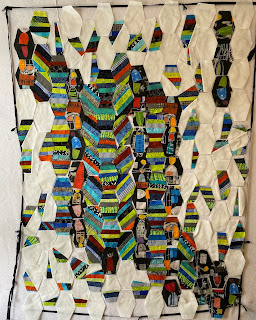 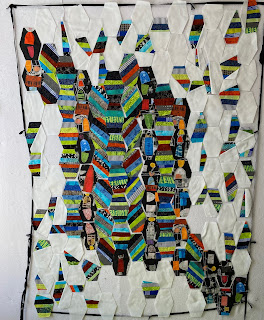 This one seemed just right.  Lots of white space and shattered pieces. 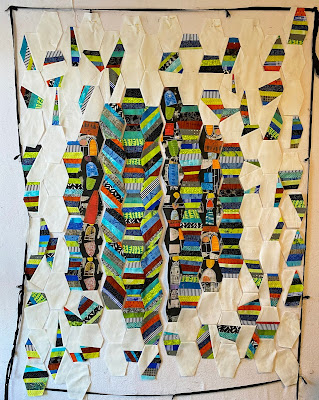 Here's what I had to do to the pieces I had so carefully cut and marked to get the shattered look.  First, I sewed the white fabric onto the pieces, trying to alter the direction. 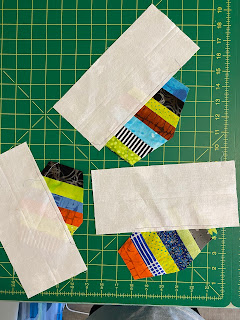 Then I cut the excess off, pressed the seams, and used the same freezer paper templates that I had used to originally cut the pieces. 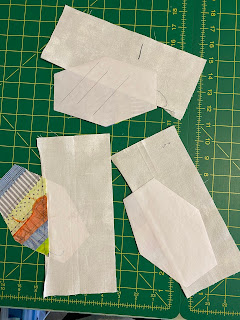 It's a good thing I was somewhat sequestered due to the COVID-19 outbreak.  It didn't seem like I was wasting any valuable time that I used to have for volunteer work in the community.  But what a mess!  This is definitely NOT a zero-waste project. 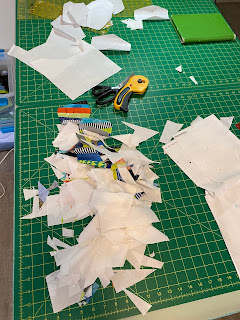 I think I have more fabric than when I started.  The bind that I took to the quilt retreat still looks quite full to me.  Do you notice that when you're doing "scrap" projects too?